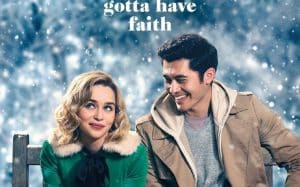 Kate (Emilia Clarke) haunts around London in the middle of Christmas carols, and it’s a whole bunch of uninspired decisions, a direct and annoying consequence of her Elf job in a season-themed store. Tom (Henry Golding) seems too good to be true when she enters her life and begins to delve into her soul. But sometimes you have to let the snow fall where it wants, you have to listen to your heart, and … you have to believe.

“A New Christmas Story” features the soundtrack of George Michael’s music, including the bittersweet classic song that gives it the title. The film will release for the first time new musical material recorded by the artist who has sold over 110 million albums and recorded 10 singles that were first in the charts throughout his career.