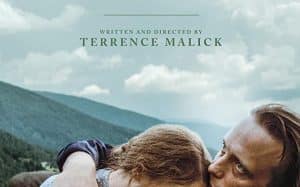 Inspired by real events, A Hidden Life is the story of an unsung hero, Franz Jagerstatter, a man who refused in the Second World War to fight for the Nazis. A boy from the country of Austria, Jagerstatter is faced with the prospect of being executed, and only his unwavering love for his wife, Fani, and his children gives him strength.

The real character refused to swear faith in Hitler. In August 1943, he was executed for defiance in the garage of the Brandenburg prison in Berlin. His letters to his wife Franziska (Fans) were edited by Erna Putz and published in English by Orbis Books.

August Diehl plays Jagerstatter and reports that he himself had a childhood on a farm without electricity. “Terrence (Malick) was curious about all of this, how I live and what my past experiences have been.” Diehl, describing Malick’s filming technique with long, non-pausing doubles, continues the story: “I had less and less feeling as I played as the shooting continued and I was in the middle of things. Sometimes I was filming while I was sleeping or just sitting in the meadow. I was practically always in the movie ”.