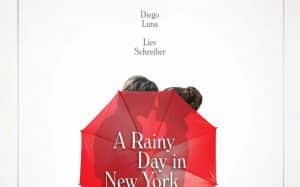 A Rainy Day in New York

Woody Allen returns to his old pleasures, to the films that defined him, which have shaped his directorial career, his beloved productions, those that focus on the importance and atmosphere of big cities. He loves to highlight the warmth and grandeur of a city, to transform cities into characters.

Harassed by people and avoided by important people in Hollywood (banned in US cinemas), the reasons being related to the sex scandal in which he is said to have been involved, Woody Allen continues to do what he likes best, continue to breathe art, to live by building new films, this is a reason that keeps him present, active, passionate, makes him have a purpose still, as he stated in an interview.

In “A Rainy Day in New York” we see parts similar to those seen in “Manhattan”, one of the very good films for which he began to be more appreciated as a director. There are similarities to the story, but also to the locations where the action takes place. Manhattan seems to be his place of soul, this is perfectly seen in the character talks, the dialogue he wrote and the story he invented.

In the distribution we have Timothée Chalamet, Jude law, Elle Fanning, Diego Luna, Liev Schreiber, but also Selena Gomez, the pleasant surprise of this production.
Elle Fanning is the heart of the film, it gives the character a slightly appealing appearance, plays the role well received. Its naturalness made the character seem to have been easily interpreted, this is seen in the simplicity with which he approaches the scenes. She plays the role of a more puzzled young woman, a girl lost in her passions, she is fascinated by the secrets behind some of the artists she appreciates and is about to discover. Get to know important people, live a day full of interesting moments, an unforgettable experience.
Chalamet is the same charming young man, he is the most sought after actor in Hollywood’s youth. And his character is part of a pleasant trip through New York, a rainy city, this is the atmosphere that the young character prefers, played very elegantly by Chalamet. And his character also has an equally unpredictable journey, an experience that makes him gain more.
Jude Law also plays a small role, as does Liev Schreiber and Diego Luna.
The surprise is the presence of Selena Gomez, the well-known American singer. She manages to play an interesting character, not highlighted by mistakes, but by charisma and naturalness.

The film relies heavily on dialogue, long discussions, atmosphere, sometimes monologue. The point is, the story doesn’t have a strong message, it doesn’t go anywhere, it’s just a day in a rainy New York, as the title tells us, nothing more. The ending doesn’t make much sense, it’s not an important one, but it’s not too believable, because of the characters, the old way they were written. The action is happening nowadays (I think), but the characters have a behavior that is not similar to that of today’s young people, perhaps because of Woody Allen’s desire to remain stuck in his glory period, perhaps because of an interpretation. obsolete of a love story from the present. There are many similarities to “Manhattan” and this is noticeable. The film suffers from a slightly outdated approach, perhaps some exaggeration, of things that no longer seem credible today. It feels like a combination between two different generations, you see it’s written by someone older and played by some young people. But it is interesting, it is a beautiful, relaxing and artistic film, good to see for movie lovers based on a lot of dialogue.