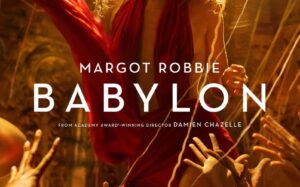 A tale of ambition and excess, Babylon chronicles the successes and failures of various characters who populated decadent Hollywood in its early days.

The story is set in Pre-Code Hollywood in the late 1920s and early 1930s, during the film industry’s transition from silent films to talkies. This era of Hollywood was famous not only for its legendary parties and debauched behavior, but also for the transgressive content of its films. Before 1934, Hollywood films could depict or involve nudity, obscene gestures, homosexual relationships, adultery, rape, abortion, and drug use. When the Film Production Code was enforced in 1934, the content of films was severely restricted, and pre-Code films were not allowed by the censors to be re-released without permanent cuts to the main prints. The Code would remain in effect until 1968, at which point the transgressive era of Pre-Code cinema was forgotten.