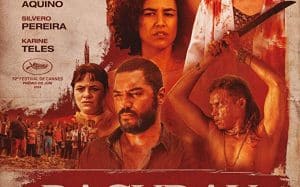 A city with only one street in the desert savannah of northeastern Brazil, Bacurau wakes up suddenly from digital maps and satellite images. “In a combination of social-political satire and cinematic enthusiasm, the town is suddenly threatened – but by whom? The film, set in the near future, has a SF feel, but the directorial style brings with the western and the Brazilian cangaço (bandit) genre of the 70-60s, “writes IndieWire.

A thriller nonsense. A scenario that offered little, with a director often awkward (continuity stuff itself). But cool as a documentary, and as an accomplishment – they filmed with a whole village (who yes, they looked in the room :)). Cool roles, good characters, yes pateoish script. And some pretty photo frames.