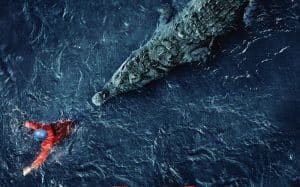 Located in northern Australia, five explorer friends venture into a little-known cave system and find themselves hunted by a hungry crocodile.

It’s not bad, but the idiotic phases when one of the girls throws the inhaler and when the injured guy sits like a fool on the edge of the stone are embarrassing … it’s logical that a crocodile attacks if you’re on the shore, sees you and jumps and that one was stupid and waiting The girl who throws the inhaler throws it like a 5-year-old girl … instead of throwing it with a little vault … give it water, her head remembered what she needed, no.

Even the idea of entering such a hidden place is childish … no station, no oxygen tubes … they had mobile phones, yes, very helpful in an underwater cave.
The end … you laugh because your stomach hurts when the car hits the fallen tree and jumps back into … the middle of the lake …

But that’s the way the movie is made, to make you comment, to be upset, otherwise, it’s boring, especially since the pregnant girl is super sexy …