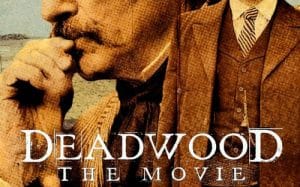 Continuing the story begun in the beloved HBO series created by David Milch, the film is written by Milch, directed by Daniel Minahan, and the cast are the actors who played the most important roles in the original series. The unforgettable characters reunite after 10 years to celebrate the state status of South Dakota. Former rivalries are resuming, alliances are being tested and old wounds reopened while all must face the inevitable changes that modernity and time have brought.