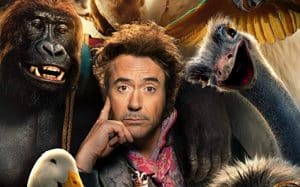 After losing his wife seven years ago, the eccentric Dr. John Dolittle (Downey), a highly beloved veterinarian from Victorian England, is isolated behind the gates of his mansion, the only company being an exotic animal housekeeper. But when the young Queen Victoria (Jessie Buckley) becomes seriously ill, Dolittle embarks on a journey full of adventures to a mythical island to look for the cure that will heal the queen, finding her courage, and waking up. – and in life the legendary cleverness, as it will have to cross its path among creatures unmoved by the human eye.

In his journey, the doctor will be accompanied by a self-proclaimed young teacher (Harry Collett), but also a frightful gorilla (Remi Malek), an enthusiastic but not too smart goose (Octavia Spencer), a cynical ostrich (Kumail Nanjiani) and an overly energetic polar bear (John Cena), as well as an extremely stubborn parrot (Emma Thompson), who is Dolittle’s trusted and most trusted advisor.