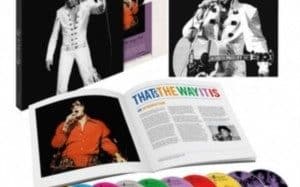 Elvis: That’s the Way It Is

To celebrate the 85th anniversary of Elvis Presley and the 50th anniversary of the release of the original production, the King returns to the cinema in the remastered film Elvis: That’s The Way It Is, an unmissable event for fans around the world.

On July 31, 1969, in Las Vegas, Nevada, Elvis Presley staged his triumphant return after an absence of nearly a decade. The concert series broke all box office records and re-energized the King of Rock ‘n’ Roll’s career.

Elvis: That’s The Way It Is is both a documentary and a concert featuring performances of Love Me Tender, Blue Suede Shoes, Heartbreak Hotel and Suspicious Minds, depicting the famous performer as a man preparing for an emotional comeback. The documentary also features fans who have traveled all over the world for this live performance of the artist who gave us rock ‘n’ roll.