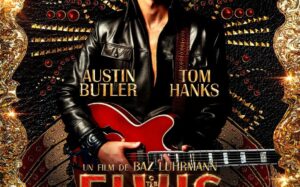 The story of Elvis (Austin Butler) is seen through the lens of his complicated relationship with his enigmatic manager, Colonel Tom Parker (Tom Hanks). Told from Parker’s perspective, the film delves into the dynamics of the pair’s complex relationship spanning more than 20 years, from Presley’s rise to fame to unprecedented stardom that changed the course of history, set against the backdrop of evolving culture and the loss of innocence in America. At the center of this journey is one of the important and influential people in Elvis’ life, Priscilla Presley (Olivia DeJonge).

Butler, previously known for his role as Tex Watson in Quentin Tarantino’s Once Upon a Time In Hollywood, himself sings songs from the first half of Elvis’ heyday, and Hanks, winner of two Oscars, captures Parker’s enigmatic character and becomes the narrator of the life of the famous singer and actor.