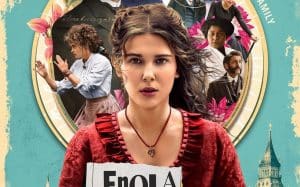 In 1884, England is a world on the brink of change. On the morning of her 16th birthday, Enola Holmes (Millie Bobby Brown) discovers that her mother (Helena Bonham Carter) has disappeared, leaving behind a lot of presents, but no clue as to the destination or reason for leaving. After a nonconformist childhood, Enola suddenly wakes up in the care of her brothers, Sherlock (Henry Cavill) and Mycroft (Sam Claflin), both determined to send her to a boarding house for well-mannered young ladies. Refusing to obey the wishes of the two, Enola flees to London to look for her mother. During the journey, she becomes involved in a mystery related to a young lord (Louis Partridge) who runs away from home and becomes a super-detective herself, overtaking her famous brother, as she discovers a conspiracy that threatens to change the course of history.

Based on the beloved series of books signed by Nancy Springer, ENOLA HOLMES is a mystery and adventure film, in which the world’s greatest detective meets his fiercest competitor: his own teenage sister. The dice have been rolled!