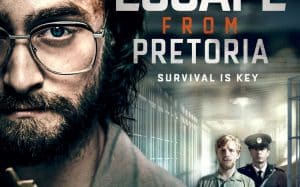 Based on the true story of the escape from prison of two political prisoners, Escape from Pretoria is a counter-timer thriller set in the troubled days of apartheid in South Africa.
An excellent film, a screening of the book of the same name (Escape from Pretoria) by human rights activist Tim Jenkins, the mastermind of the spectacular escape from the Pretoria prison in 1979. The film is a screening of the book in which Tim presents step by step his escape and to the two colleagues opening no less than nine doors with the help of wooden keys made by hand and tested over a year. A realistic film that closely resembles Escape from Alcatraz.