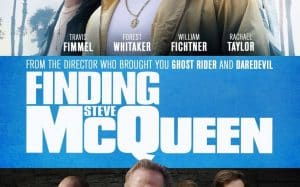 Sabotaged several times by the small budget, Finding Steve McQueen is still a light drama, with some successful sequences and comic lines, a pleasant soundtrack, plus good performances by William Fichtner and Louis Lombardi.

The big attraction for me was Travis Fimmel, who I wanted to see in something else after the Viking series, plus a few years ago, I saw The Baytown Outlaws with him, which I really liked. Here it doesn’t impress too much, being quite erased and unconvincing both in the dramatic and in the comedy moments. The highlight of the film in my opinion was the exploration of the relationship between Harry (Travis) and Molly (Rachael Taylor).

A movie you won’t love, but you won’t hate either. It goes to be seen once, without too many expectations.