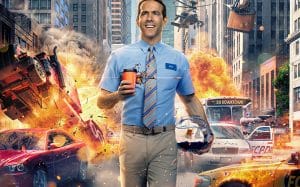 Ryan Reynolds plays a bank clerk, who discovers that he is in fact a secondary character in a video game, and decides to become the hero of his own story … one that he rewrites himself. Now, in a world without limits, he is determined to become the one who saves his world in his own style … before it is too late.