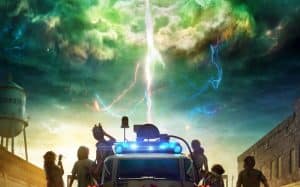 After moving to a quiet town, a mother and her two children find out that they have a close connection with the original Ghostbusters team and try to understand the legacy left by the family’s grandfather.
Jason Reitman, the son of Ghostbusters (1984), delivers a sensational sequel, in which ghost hunters are curious and brave children.

In an excellent video essay, Evan Pushak (known as Nerdwriter) talks about the trend of remakes, sequels and prequels that Hollywood has been serving for some time. He calls them “weaponized intertextualities” – meaning nostalgic references to the established universes of the big movie franchises, designed to arouse a certain satisfaction among viewers, as when you see the famous Star Wars Millennium Falcon in The Rise of Skywalker and a brief déjà vu of the whole story of the ship. But more and more often, these intertextual references can become a dramaturgical substitute, as in the Hobbit trilogy, when Sauron appears just for the sake of recapitulating everything you know about him from The Lord of the Rings, although he has no role. his presence there. Probably nowhere is this technique more abundantly used than in Ghostbusters: Afterlife, which is caught as a parasite by the charm of the 1984 original.

After an intense prologue that establishes the fine line between the world of the living and the sleeping, we follow the story of a single mother, together with her two children, who are evacuated from their apartment, being forced to move to the ruined farm of their father, respectively to their absent and mysterious grandfather. The three of them have a hard time adjusting to the new rural wilderness, where they are trying to rebuild their lives, and they will discover the real reason why their father / grandfather had retired, where he had come to be seen as a crazy old man.

Phoebe (Mckenna Grace), a 12-year-old girl, is a brilliant and introverted child, endowed with early science skills, but with a whole repertoire of bad jokes. She doesn’t seem to need the summer school her mother sends her to, but there she befriends a kid who calls himself Podcast, because he always holds a microphone in his hand and does podcasts about conspiracies and supernatural events. Trevor (Finn Wolfhard), Phoebe’s brother, is a shy teenager with a passion for car mechanics, who hires at a restaurant only to be in the presence of Lucky (Celeste O’Connor), an older waitress like him, who he almost overtakes the young man in love, but gradually comes to sympathize with him.

The mother of the two brothers, Callie (the talented Carrie Coon), will also be courted by Grooberson (Paul Rudd), the summer school teacher, an intelligent and charismatic but slightly phlegmatic individual who puts VHS tapes with horror movies to take care of his studies of the dubious seismic effervescence of Oklahoma, because the whole land is shaken daily by an inexplicable earthquake.

Gradually, young people will discover not only that their grandfather’s farm is not what it seems, but also that the entire planet is threatened by the shocking specters of the past, which are coming to the surface in a real cataclysmic development, similar to the events in Manhattan, but of a magnitude that challenges the unsuspected legacy of the family.

Director Jason Reitman (Juno, Up in the Air) also took over this franchise as a legacy, being the son of Ivan Reitman, who directed the original Ghostbusters. Here, Jason used a whole stylistic of nostalgia to wipe the dust off the entire original anti-ghost arsenal, led by the car with the ECTO-1 number, ghost detectors and traps, as well as proton weapons that chase evil spirits, following to be reused in thrilling action sequences.

Jason Reitman took some stylistic elements from directors like Steven Spielberg or M. Night Shyamalan to instill that mystery of the island and ghostly spaces discovered by children, in a neo-gothic Hollywood key, but what is strange about this story with ghosts is that all the characters react with an improbable indifference when they see for the first time in their lives a supernatural appearance, quickly passing over what would normally leave them completely dizzy.

Otherwise, the charm of the Ghostbusters franchise is that it introduces us to initially naughty and funny ghosts, which only later become dangerous, oscillating between a Sunday action comedy and a gentle horror. From this point of view, Ghostbusters: Afterlife retains the magic of the original, and the fact that the action is centered on a children’s story well complements the adult perspective of the original, but does not propose, as there, a political commentary. In the 1984 film, the four ghost hunters are out-of-the-ordinary scientists who start their own experimental and bizarre business, facing countless obstacles (especially from the state), even though their small business proposes the only form of salvation of mankind. It is, therefore, desp