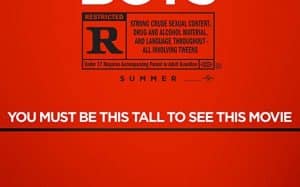 How bad can you go one day? The creative minds that brought Superbad, Pineapple Express and Sausage Party super-comedies to the cinema bring into play a gang of sixth-grade rifles with maximum chances of irritating laughter.

After being invited to his first kissing party, Max, a 12-year-old kid (Jacob Tremblay, in the Room), panics because he does not know to kiss. Max, helped by his good companions, Thor (Brady Noon, Boardwalk Empire) and Lucas (Keith L. Williams, The Last Man On Earth), decide to use the father of Max’s father, which he is not allowed to do to touch, to spy (or so dream) a couple of adolescents in love with Max’s house.

But when the whole thing goes awry and the boys manage to destroy the dronade, the madness begins. Desperate to get hold of another before Max’s father returns home (Will Forte, The Last Man on Earth), the guys chuckle at school and enter an avalanche of decisions, one worse than another. They accidentally steal a drug bag, hide from the police, scare off teenagers (Molly Gordon, Life of the Party and Midori Francis, Ocean’s Eight).

The comedy is produced by Seth Rogen and Evan Goldberg (Superbad, Pineapple Express and Sausage Party comedians) through their Point Gray company and James Weaver (Neighbors) from Universal Pictures and Good Universe. The script belongs to Lee Eisenberg and Gene Stupnitsky (The Office, Bad Teacher). Directed by Gene Stupnitsky.