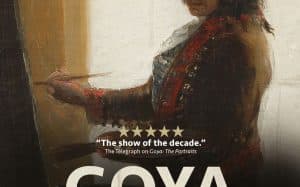 Goya: Visions of Flesh and Blood

Successor to Velázquez, hero to Picasso. Discover Spain’s most famous artist in this cinematic tour, based on the unpublished exhibition at the National Gallery in London – Goya: The Portraits.
Francisco Goya is the most famous artist in Spain and is considered the father of modern art. Not only a fine observer of the daily life and of the problematic past of Spain, but also an artist gifted in the art of portraiture and a commentator of social problems par excellence. Goya brings the portrait, in style, to new heights, and his genius is re-evaluated in the much awaited exhibition at the National Gallery in London. The film uses the exhibition to delve into Goya’s tumultuous life.