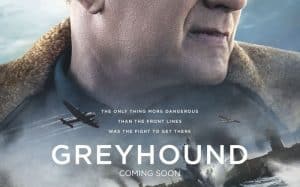 The strong points of the film are:
Continuous suspense maintained for more than 50% of the film’s duration, visual effects and collective acting. When you wait 24 hours for air support, being within range of the attack of several Nazi submarines (famous for their unparalleled submarines at that time 1939-1945) you feel that “hours pass like days.”
The members of the American Film Academy are recognized for their weakness compared to these historical and war films (part of World War II) and I would not be surprised if this film receives about 3 nominations for next year’s OSCAR gala. And here I mean nominations for:
Best Picture, Best Visual Effects and Best Supporting Actor (Tom Hanks)
And by the way, I’m sorry that these great actors, like:
Robert De Niro, Al Pacino, Morgan Freeman, Jack Nicholson, Tom Hanks, Antony Hopkins etc. is inevitably nearing the end of their film career …
I don’t think that Hollywood will have a good period of time in the future for actors to approach in terms of value and acting talent, with the legends of the highest level cinema, mentioned above.
Ernest Krause (Tom Hanks), the captain of the American warship, Greyhound, at the end of his first successfully completed mission. I quote:
“Thank you, Heavenly Father, for keeping me on this day. In Your hands I entrust myself, with body and soul. Amen!

During the film which has 1:30, I did not feel bored at all, the suspense is always present in this continuous dance with death carried with the enemy. The editing makes you feel that the atmosphere is real and intense, helped by the soundtrack. Interesting to watch a movie that has a screenplay written by Tom Hanks, even if it is inspired by a short story – “The good sheperd” by C. S. Forester. The slightly cliché ending, from the drawer with “Americans, the good guys, who always win”, but overall, a captivating war film.