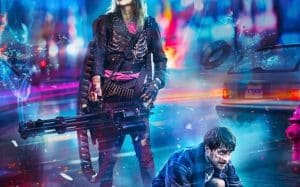 Miles (Daniel Radcliffe) has a nice job and is still in love with his ex-girlfriend Nova. His boring life takes a dramatic turn when, inadvertently, he finds himself registered on a dark web site, which forces completely unknown people to fight in a deadly game, so that their fights can be broadcast live worldwide to a public fanatic.

Competitors are chosen by a clandestine gang known as SKIZM, which puts the weaker competitor in control of their struggles. Thus, following a violent attack on his home, he wakes up with a pistol in each hand fighting to survive, being hunted by another victim of the game, namely Nix (Samara Weaving). Initially, Miles’ habit of running away from his problems helps him, deftly avoiding his first opponent, but when Nova is abducted, he must finally overcome his fears and fight for the girl he loves.