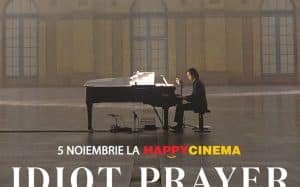 Idiot Prayer – Nick Cave Alone at Alexandra Palace presents Nick Cave playing his piano pieces in an unseen form, from Bad Seeds and Grinderman to Ghosteen, the recent Nick Cave & the Bad Seeds album. The film includes performances of songs such as Into My Arms, The Mercy Seat, Higgs Boson Blues and Girl In Amber. Filmed in June 2020 and originally intended as an exclusive online event, fans will be able to see the film in the cinema, with an extended cut containing four exclusive shows.

Recorded during the period when Britain was gradually coming out of isolation and conceived as a reaction to this isolation from previous months, Idiot Prayer is a souvenir of these strange times. The material was filmed by award-winning Robbie Ryan (The Favorite, Marriage Story, American Honey) in West Hall at Alexandra Palace. It was edited by Nick Emerson (Lady Macbeth, Emma, Greta) with music recorded by Dom Monks.