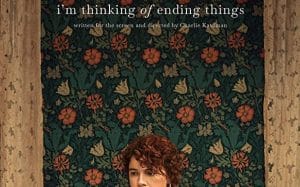 An Oscar-winning Charlie Kaufman (Eternal Shine of the Righteous Mind) film based on Iain Reid’s famous novel.
Despite some doubts about the relationship, a young woman (Jessie Buckley) sets off with her new boyfriend (Jesse Plemons) on a car trip to his family’s farm. Because of the blizzard, she gets stuck on the farm with Jake’s mother (Toni Collette) and father (David Thewlis) and begins to ask questions about what she knew or thought about her boyfriend, herself and the world at large.

I was a little disappointed in the end because more than half of the movie gave me the impression that it was over Synecdoche and that I would have a new Charlie Kaufman favorite. Towards the end, especially in the last 20 minutes, he went to an area full of coding that took me a little out of the state offered until then. I don’t say it as if you understand too much until the last part, but at least you get with the portion, and the slow rhythm, the mystery and especially the exchanges of lines, keep you extremely captivated.
Looking cold, almost two months after watching it, I realize that I have many things left imprinted in my mind, that I still rarely receive cinema so deep in ideas such as this case, but also that I would he wants me to see him again. As for acting, excellent from everyone.