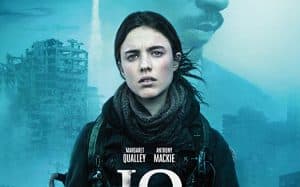 As she tries to find a way to save the dying Earth, young researcher Sam Walden gets closer and closer to Micah, a young man of color who wants to catch the last escape shuttle at all costs.

So another propaganda film of the great globalist trust called Hollyshit (it really tries not to cut the truth admine). Plus, the action is haunting, not to mention the predictable end since we entered the “scene” of the “black panther”. not to mention the final phase. If I could give it a minus 1 it would be good.