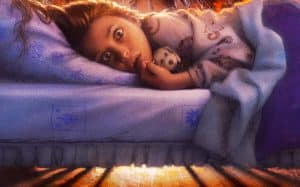 Kara, a single mother, moves from New York to the quiet countryside, together with her two children, for a job opportunity she can’t afford to give up. The family moves into their new home, where Kara begins her career as Walter’s personal nurse, a man with multiple sclerosis and an evaluator of rare antiquities with a secret past. Her teenage son, Jesse, is most unhappy about this, losing his friends and moving into the middle of nowhere. Things seem pretty normal until Jesse discovers a mysterious old relic in the old man’s house. This discovery entails unexpected and frightening things. Everyone quickly discovers that the relic contains more than legends. Inside, a terrifying creature awaits, born of ancient darkness and pure instinct: a prehistoric cave spider, different from what the modern world has ever seen. What will be the outcome?