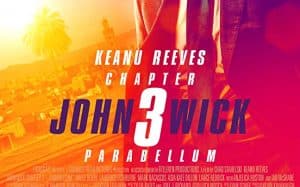 The third part of the famous franchise finds infamous assassin John Wick (Keanu Reeves) in a new situation at the limit of the impossible: his life now costs 14 million dollars, for which an army of relentless reward hunters is on his traces. After the murder of a member of the dubious international payroll assassinated organization, the leadership ruled out Wick, leaving him unprotected in the eyes of the most ruthless snipers in the world.