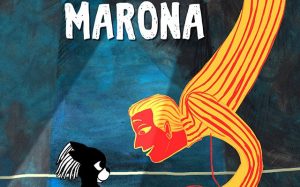 “The fantastic journey of Marona” is a modern tale about unconditional love and sacrifice. The little dog, with a heart-shaped nose, born from a love story between an Argentine dog and an attractive midwife, leaves deep traces in the lives of the owners who, in turn, receive it in their families.

As the poets Olitilia Cazimir, Elena Farago and Ana Blandiana once, the filmmaker Anca Damian looks at the world of those who do not speak and gives a voice to the puppy Marona, in a story about how little we really need to be happy. The film is moving, the character is engaging, the graphics ingenious and memorable, and the story … as in life. Which is not necessarily an asset, because film dramaturgy has rules other than the course of life.

Marona is the ninth puppy of a puppy and her father is an Argentine dog. In his portrayal we see the filmmaker’s inclination towards visual metaphors, which will continue throughout the animation. The hot dog deflates like a balloon when it comes to taking responsibility. Also here we have the first discussion about pure and crafty “races”, which could be inoculated with usefulness in the minds of the smallest spectators, opening the occasion for the subsequent discussions of the parents about tolerance. “We all have the right to love,” says Marona.

On the other hand, “it doesn’t take much to be happy”, the protagonist repeats, as a leitmotif of the film, which reveals Marona as the raisonneur of her own film, which makes mature judgments about life, about the relationship human-animal and about happiness.

Manole Acrobat is the first master of Marona, then the garbage man Istvan, after which the girl Solange. In the fragment “the acrobat”, the decorations are, as in the theater, panels that rise up revealing new sets. The graphic performance of the acrobat is ingenious, the lines that compose it compose and decompose, in a fluidity that characterizes the character. Children will be hypnotized.

Marona will then become the puppy of the heavy and massive Istvan. When she is left alone, Marona has the impression that the containers she keeps are cumbersome over her. Istvan’s mother is an old woman, and the way her face is drawn again shows the filmmaker’s preference for deconstructing the metaphor – thus, the character’s bristled face becomes the ragged bag itself that an octogenarian could compare to.

In the third segment, Marona is adopted by a little girl, Solange. Marona’s remarks are more cynical and less optimistic, but the dog’s unconditional love can be seen in this fragment of the story.

The film ends with the beginning frame, a metaphor about fading memories, as if taken by the wind. Will we remember Marona? The story deserves more screenwriting effort. The linearity of the story, plus the fact that the narrator says all the time that is happening on the screen, makes us end up feeling this as a redundancy, it seems to us that the film is repetitive and monotonous.