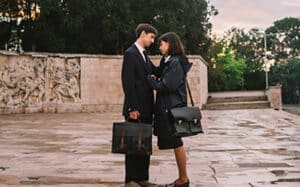 While Țiriac and Năstase are playing the Davis Cup Final against America in 1972, two high school students fall in love and write letters on the METRONOM show from Free Europe. When he gets the approval to leave the country for good, together with his family, they know they have to separate, but they did not expect that the last days together will become decisive for their entire lives.
It is a documentary film about the Romanian Juchista goat that holds its tail up! The film is superb because it is presented as a history lesson about Ceausescu’s Juchist-Communist Romania and how the mass media was oppressed and forced to think against intellectual people! We also notice some amazing things! A dying relationship, a letter sent to Cornel Chiriac from the show Metronome, from which the trouble with the security and the militia starts (only now that letter is no longer used as a blackmail weapon as in Caragiale’s play, but as a weapon of betrayal forced against peers and friends) and unity among friends! The dying relationship really reflects a sacrifice. If you really wanted to leave Romania, leave practically everything behind and if necessary you could betray yourself to escape unseen! And we can also say that it was like in North Korea because many who left Ceausescu’s Romania chose the broken families, if you managed to flee the country and were not caught, your family was excluded from the party and announced citizenship rights were also cancelled. If it was a Korean film, we wouldn’t talk about prison or forgiveness or paternal mercy, it would go straight to execution, because if in Ceausescu’s Romania anti-communists were considered buffoons or imprisoned, imagine that in Korea they would execute them directly and we would be saw a copy after Franziska Stünkel’s Nahschuss (Nahschuss is a film about the last execution for treason in East Germany which was the year of grace 2022 at TIFF 21′) Indeed, North Korea is much more closed and those people in 1972 they did it much worse and worse than us considering that hunger is a chronic disease for them and the fact that their only “religion” is JuCHism! (That is, the ideology that is based on the only leader without any national state assembly or a proper government that is of communist orientation) and I make the comparison with North Korea because when Kim Il-Sen came to power, many had broken families (here we can refer to the dying relationship between Ana and Sorin, which is about to end because the boy is leaving for another country) And there are many reasons that prove the fact that families who lived under communism were broken down! However, despite the fact that the relationship between the two is on the verge of falling apart, only reunions with friends or love keep them together for a while, but not for long!
The letter, like the one in Caragiale’s play, represents a weapon: But what weapon?
It is no longer a blackmail weapon, but one used to betray. When the boy says that he “found I don’t know what foreign journalists to take the letter to Cornel Chiriac, more precisely to Radio Europa Libera”, he hands it directly to the security and they are all arrested. In practice, the communist state also encourages the idea of breaking up the family and betraying people. And we see that at that time people had access to information, just about as much as the poor people from the dusty villages in Romania where they currently vote with HaUR and PeSeDe! The most important thing is the unity between friends and how much we dare to endure together!