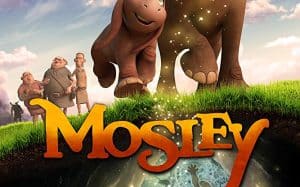 To save his family, Mosley embarks on a fantastic adventure to find the Right, but to his great surprise, he finds a secret that reveals the truth about his own nation.

Mosley, along with his family of patriotic Trollifants, lives as a simple laborer on the farm owned by Simon, an extremely ruthless individual.

One evening, after Mosley has been plowing all day, his son, Rue, comes to tell him excitedly that he has discovered something magical in the woods near the farm. Bera, Mosley’s pregnant wife, persuades her husband to go with Rue there, to see what it’s all about.

Although he is tired, Mosley becomes entangled with his son, and goes into the woods. There, Rue shows him what he had discovered: a cave whose walls were covered with drawings representing Trollifants as they were, with the immense difference that they were walking upright, on two legs, and had … hands. For what unknown reason had the Trollifants come to roost, in four legs, and to have no hands?

So, Mosley is determined to give the Righteous, who would release him and his family from slavery, and offer them much-desired freedom. But this mission will be extremely dangerous, because Warfield, a very brutal hunter, is following in his footsteps. Will Mosley manage to reach the fantastic city of Kinesareath, the home of the Right, before Warfield captures him, his wife is born, and his son, Rue, is sold to another farmer?

As if that weren’t enough, Mosley discovers that the Right are not at all as he imagined, and that they cannot help him find freedom, so he will have to rise to fight against the enemies, and thus unleash the magic that will help him become, in turn, the Right One.