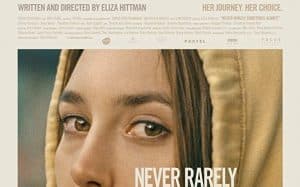 The story of two teenage girls from rural Pennsylvania who travel to New York City for medical help after one of them gets an unwanted pregnancy.

The deja vu feeling didn’t leave me for long. Maybe the acting of actress Sidney Flanigan, a game that reminded me of Saoirsa Ronan in Lady Bird.
Maybe in both movies it feels like a woman is behind the camera.
Never Rarely Sometimes Always, is a cruel account of the life of a 17-year-old girl.
Using a style that could be classified as “ciné vérité”, the director manages to tell us, through images, the story of a girl from Pennsylvania. A girl more than likely abused when she was 14, who already has a history of sex life, a life in which partners most often used force. Her story is very visual, because the tears on her face, while filling out the forms or the hand that grabs Kelly’s hand tightly during the medical procedure, say more than a thousand words.
Using the antithesis Autumn – Skylar, the director presents us with another facet of life led by the heroine. While Skylar is the pretty one, the one who conquers with a smile, Autumn is the one that no one wants, the one who is mocked, who desperately needs tenderness. And who, not receiving it, does not even know how to offer it. I liked the movie because it doesn’t come with fairy tale endings, it doesn’t have moralizing lessons about pregnancy and accepting motherhood, and what happened might happen again.