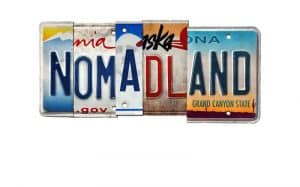 Nomadland tells the story of a sixty-year-old woman who, after losing everything during the Great Recession, embarks on a long journey through the American West, using, like a modern nomad, only her van.

A story from deep America. ,, No country for oldmen ,,. Because this is the fate, there are people that society rejects when it no longer needs them. Because life can be hard, complicated and hard to bear, it’s all about being positive and singing a happy song. It’s interesting that the story begins in 2011 when Trump was not in power … The film is made to impress and even succeeds to the fullest, it has already won the Venetian Golden Lion and was crowned as the best the drama at the Golden Globes, but the feeling is that he did not necessarily receive these awards on value criteria. Yes, the subject is impressive, the drama of the people is deep and Frances Mc Dormand can hardly be blamed for anything. The problem is that the story is told searbly, without style, without nerve, Chloe Zhao directs flat, boring, it’s a monotony that urges you to sleep, I fell asleep while watching and it didn’t happen because of fatigue. Taking into account the world we live in and the dubious harvest of the previous year, it is not excluded that this film will be chosen with the Grand Oscar …