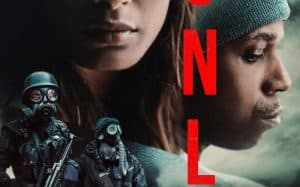 A comet threw toxic snow on the earth – it infects and eventually kills part of the planet’s human population, women. World governments are enacting laws that force healthy women to surrender to the police for their own safety. Will is determined to keep Eva, his partner, away from the disease, the police and the bounty hunters who are hired to look for them and catch the few women left alive. As time goes on, Will and Eva begin to believe that they are not safe in his apartment and that they have to move to a safer place in a rural area. The film is a SF thriller that calls into question what it means to be human and to be free.