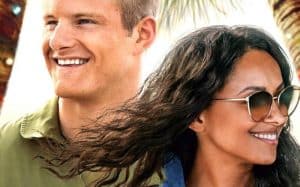 As she gathers evidence to close a U.S. air force base in the tropics, a congresswoman’s assistant attaches herself to a sea captain.
Probably one of the most common recipes in Christmas movies is that of the cynical and careerist protagonist who comes to understand that the world could be better as soon as he changes perspective, usually on arrival in a small town, where the spirit of Christmas is at great honor. This is also the approach in Operation Christmas Drop / Operation Happy Christmas, a film that lists the well-known clichés, but ends up offering a little more than that. It is no wonder that the feature film is now in first place in the top of viewings on Netflix Romania.

In Operation Christmas Drop, the mentioned protagonist is actually a protagonist, Erica (Kat Graham), the assistant of a member of the American Congress whose first political goal is to restrict the American military presence in the world. Even at Christmas, Erica is given the task of investigating an American base in the South Pacific, the implicit suggestion being that her report would do well to suggest that the base should be closed. We don’t even need to finish this synopsis, because we already know what will happen in the tropical paradise where Erica meets the handsome captain Jantz (Alexander Ludwig) …

As I said, Operation Christmas Drop may be cliché after cliché and it could probably win the Most Predictable Movie of the Year trophy, but it somehow manages to get under your skin and reuse the old theme of Christmas self-help. After all, we do not watch Christmas movies to discover innovative stories, but to confirm familiar values, such as love of neighbor or altruism. And here Operation Christmas Drop excels, compensating for points lost by predictability.

Graham and Ludwig (who most Romanians know from his negative role in The Hunger Games and, more recently, from the Vikings series) have very good chemistry and, surrounded by palm trees, pristine beaches and blue waves, manage a credible evolution of the protagonist, from cynical preconceptions to complete devotion to a good cause.

The most disturbing aspect of many of the titles of the genre is the suggestion that self-discovery takes place somewhere far from home, a suggestion with which we do not agree at all. We don’t have to run to Micronesia to realize that we can do good, we just have to look for a good cause close to home and get involved. And how good it would be all over the world if each of us were captivated by the “Pay it forward” principle, explored in 2000 by the film of the same name with Kevin Spacey and (then still little) Haley Joel Osment. .

What Operation Christmas Drop does wonderfully is to show that we can always find people less fortunate than us, and that the spirit of Christmas is never stronger than when you help someone. A good deed may not always come with flirtation, love and good cheer, as it does for Erica, but the satisfaction of an altruistic and selfless act is certainly the next thing. That’s why I appreciated Operation Christmas Drop and that’s why we invite you to give it a try …