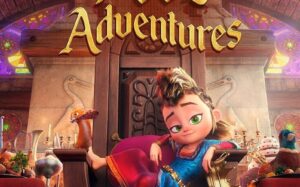 A brave little girl disguises herself as a princess to save the kingdom and the heir to the throne.
Pil is an orphan and lives on the streets of Roc-en-Brume. Aided by three tamed weasels, she steals food from the castle of the odious Tristain, the usurper of the throne. One day, to escape the guards who are chasing her, Pil disguises herself as a princess. Without her will, she ends up participating in the great rescue of Roland, the heir to the throne, who became the victim of a spell that transformed him into a… kitty (half cat, half puppy). The adventure will turn the kingdom upside down and teach Pil that nobility is found in each of us.