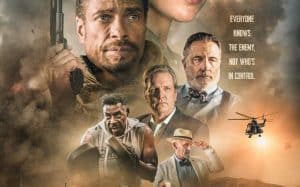 When Kate, the love of her life, is kidnapped and detained for ransom by terrorists, war hero Brad Paxton begins a race against the clock, in a bold operation, which puts him in front of the strongest and darkest forces.
What do we have here? A white, tanned American, who is going to do everything he can to save his pregnant wife (the beautiful Serinda Swan) from the hands of some terrorists from Africa. It’s the thousandth time I’ve seen a pro-American movie in which this time those bad guys are Algerians. The boss of the Algerians is the nice Samy Naceri, known especially from the Taxi comedy series. Andy Garcia also appears in the film as an ambassador. Recommendation: Serve with lemon to cut your nausea.