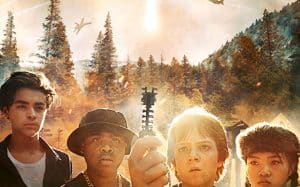 Rim of the World

Four teenagers from completely different backgrounds attend a summer camp called Rim of the World in the mountains of Southern California. While there, the aliens from outer space begin to attack the area. Teenagers soon find a crashed spacecraft with a female astronaut inside. She gives Alex (Jack Gore) the key to the information needed to stop the invasion, and the four have to take her from camp to Pasadena, California. Along the way, the four begin to get to know each other better as they struggle to escape the many obstacles in their path.