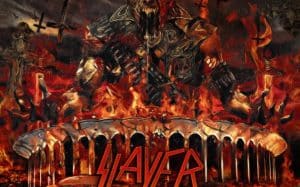 For nearly four decades, Slayer has delighted metal fans everywhere. With their place in music history for sure, Slayer – Tom Araya, Kerry King, Gary Holt and Paul Bostaph – in collaboration with Trafalgar Release, Nuclear Blast Records and Prime Zero Productions, will unleash the Slaytanic offensive on the big screen. The film will feature a short film about the band, along with the Slayer concert on August 5, 2017 at the Los Angeles Forum.