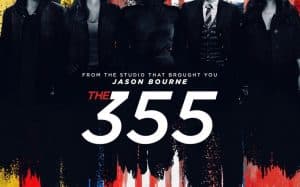 From the successful director Simon Kinberg, who defies genres, comes the film 355 – an espionage thriller that brings together some of the most famous actresses in a dream team.

When a secret weapon falls into the hands of the mercenary, CIA agent Mason “Mace” Brown (Oscar®-nominated actress Jessica Chastain) must join forces with rival German agent Marie (Diane Kruger), former MI6 ally and high-tech specialist , Khadijah (Oscar® winner Lupita Nyong’o). Together with Colombian psychologist Graciela (Oscar®-winning Penélope Cruz), they embark on a lethal and dizzying mission to retrieve the weapon, trying to be one step ahead of a mysterious woman, Lin Mi Sheng (Bingbing Fan, X-Men : Days of Future Past).

As the action spreads around the globe, the women’s quartet forms a bond that could protect the world but kill them.