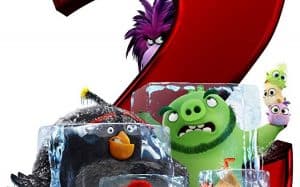 In the second part of the animation based on the popular game created by Rovio Entertainment, the famous non-flying birds and the green pigs fight their fight to another level.

We would say nothing on the Bird Island has changed. Becoming celebrities, unarmed warriors are still warring with green pigs, and it would be said that nothing will ever stop this cunning. Until a new island appears on the horizon and so the two camps are forced to ally. What the shock team shows and what plans (not) it has to conquer the new territory we find out at cinema on August 16th.