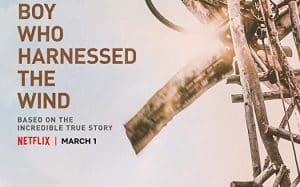 The Boy Who Harnessed the Wind

Written and directed by Chiwetel Ejiofor, The Boy Who Harnessed the Wind is based on a true story. Inspired by a science book, a 13-year-old teenager, Trywell Kamkwamba, is building a windmill in an attempt to save his hungry village in Malawi. In an impoverished country of poverty, corruption and hunger, an ambitious child finds a way to fight hunger. Made from a real case, this life story inspires you to hope, when you really want to, you can change the world or at least the world around you. An impressive film about Africa’s poverty, hunger but also about the ambition of a child from a poor family to learn, to overcome their modest condition and to help their family. The film is exciting, by highlighting the main character’s determination, through his thirst for knowledge and his motivation despite the opposite fate.