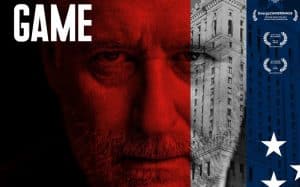 A spy thriller set during the Cold War, The Coldest Game shows us Bill Pullman as Joshua Mansky, a brilliant mathematician kidnapped by the American secret services and forced to take part in a chess competition against the reigning Soviet champion.

In the midst of a pandemic, it is good to remember from time to time that there are even greater dangers and one of the most important, perhaps even the most serious, is the nuclear danger. The 1960s, the Cuban Missile Crisis, the imminent threat of a nuclear war. It didn’t happen, it would have been destructive, we know something from the later course of history at a high level even if we will never know for sure why JFK was assassinated. The film suggests that nowadays the danger can return at any time, it does not aim to be a serious warning, it does not exceed the level of honest thriller, smart propaganda. Director Lukasz Kosmicki knows how to tell stories so as not to get bored, the atmosphere of the cold war is carefully evoked, we “sink” with pleasure in time to find Warsaw in the 1960s and watch the confrontation between the very positive Americans and the Soviets. very negative. An extra point for Bill Pullman’s character, the most complex and believable in the whole story.