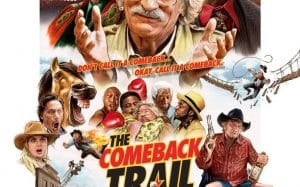 Max Barber (De Niro), a film producer anointed with all the ointments, has a huge debt to the dreaded mobster Reggie Fontaine (Freeman), after his last film is a box office disaster. Now, the stake is his life, so he comes up with a scheme to fool the insurance company and pay his debt to the mobster: to kill his lead actor, and collect the money on his insurance. But when Duke Montana, a long-time alcoholic and glorious western movie star, insists on not dying in the stunts he does on his own, Max hardens, and invents more and more dangerous situations for the old actor. To everyone’s surprise, not only Duke will survive, but also Max’s career as a producer, as the film will prove to be a crushing success.