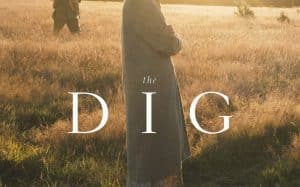 As World War II knocks on the door, a wealthy widow (Carrey Mulligan) hires an amateur archaeologist (Ralph Fiennes) to dig the graves on her property. The two make a historical discovery, the echoes of events in England’s past resonating with elements related to the country’s uncertain future.

One of many feature films set to release on Netflix this year, The Dig / Site uses two excellent actors (Carey Mulligan and Ralph – pronounced reif – Fiennes) to tell an extremely British story about the discovery of the equivalent of “golden chickens” in England. Without missing its problems, the film has a special charm and turns into an ode to knowledge, experience and professionalism, an ode that can not be more appropriate now, when professionals of all kinds are contradicted by service experts on all corners the internet.

The story begins in 1938, when England began to be seized by the fever of World War II, and the widow Edith Pretty (Mulligan) finally decides to dedicate herself to an activity that has preoccupied her for a long time: the excavation of mysterious mounds of at the edge of her lands. After a negotiation with Basil Brown (Fiennes), an uneducated archaeologist, but with a whole life spent on various sites, the action begins, although most everyone in the area thinks that the time is not right for such a thing. Obviously, Edith’s intuition and Basil’s frustration will soon bear fruit …

What we liked about this movie, apart from a few gorgeous frames that we would frame and put on the wall, is its rhythm. We have become too accustomed to hyperkinetic stories, the viewing of which leaves you exhausted rather than satisfied. No worries about it now, for The Dig reveals itself leisurely, as the skillful hands of Basil Brown and his helpers removed the earth from Sutton Hoo inch by inch, revealing the treasures below.

Yes, at some point the story loses its focus, and the main characters also get lost, really bizarre, in the background of events, but The Dig promotes values ​​that are never too often to remember. First, respect for the past and how it prepares us for a better future. But also perseverance, because the heroes do their job even when everyone around them tells them that they are wasting their time, and especially the fascination of knowledge and the relevance of the sustained effort, that of removing layer by layer the veil of ignorance, finally reaching the treasures behind his. The story in The Dig is truly exemplary, and it wouldn’t hurt to give it a try with the whole family.

The youngest spectators will of course identify with the heroine’s son, Robert (Archie Barnes), and his enthusiasm for the mystery behind the excavations, but also for the benevolent presence of Basil, whom he sees as a deputy of the deceased father. We also have a love story, we talk about the all-destroying war and we also witness what happens when, after Basil does all the work, a procession of famous archaeologists rush like hawks to reap the fruits of his efforts.

But the theme of this effort is what remains of The Dig, despite its unjustifiably generous length. Of course, we can’t all dig the mounds in the yard, but Simon Stone’s film is a particularly valuable urge in these times when we watch cooking contests, but we don’t cook, we watch various craftsmen on youtube, but not we never physically explore their craft and generally leave our lives dominated by inactivity. To all of us, The Dig tells us to get to work, and even if the result of our effort will not be as spectacular as that of the Sutton Hoo excavations, we will certainly always learn more by doing something, anything, than by not doing it. nothing.