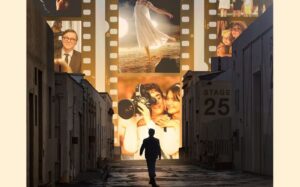 A deeply personal portrait of 20th-century American childhood, Steven Spielberg’s Fabelmans: The Story of an Extraordinary Life is a cinematic memoir of the forces and family that shaped the director’s life and career. A universal coming-of-age story about an isolated young man’s pursuit of his dreams, the film is an exploration of love, artistic ambition, sacrifice and the moments of discovery that allow us to see the truth about ourselves and our parents with clarity and compassion.

Sammy Fabelman (Gabriel Labelle) is dedicated to filmmaking, an interest that is celebrated and supported by his artistic mother, Mitzi (Michelle Williams). Sammy’s father, a successful scientist, Burt (Paul Dano), supports Sammy’s passion for movies, but sees it as a hobby with no future.

Over the years, Sammy documented his family’s adventures and became the director of increasingly elaborate amateur film productions with his sisters and friends. Until the age of 16, Sammy is both the primary observer and archivist of his family history, but when his family moves west, Sammy discovers a heartbreaking truth about his mother that will redefine their relationship and alter the future for him and the entire his family.