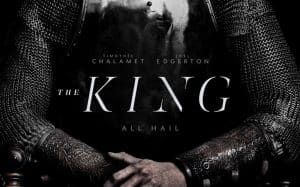 We will see Henry at the beginning of the 15th century, when his life was overthrown by the imminence of ascending the throne at a time when England was involved in the bloody 100-year War with France.

A production that has in the main roles young actors, actors who surprise in recent years, who grow from film to film through their very good evolutions. Actors like Robert Pattinson, Timothée Chalamet, Lily-Rose Depp, all being the new faces Hollywood is enjoying these years. The two are already known, but Johnny Depp’s young girl is an actress who comes with a fresh air, an interesting acting style and a special charm. She has a small role here, but within a short time she manages to impress.

The movie is good, it ends with an interesting story. A very beautiful production filmed sometimes, the presence of the wide-ranging frames helping a lot, frames in which the cinematography stands out very well, being a very good part of this production, along with a good acting (especially from Chalamet) and a soundtrack very interesting, powerful, present and well used.

The story seen here is quite captivating, it is based on some real historical events, more being based on some important characters that played a role in those times. The movie made by Netflix builds a story as believable, a story that keeps you interested, interested. A film of more than two hours that does not feel too long, this due to the gradual construction of tension, the characters, but also due to a slightly unpredictable ending.
The script also has gaps that do not hurt too much, with some parts of the film being too current to be believable, especially the characters’ faces and behavior.

In this role, Timothée Chalamet shows the maturity he needed to prove to those who did not trust that he could play a movie alone, to people who were related to his immaturity and youth when they learned that he was chosen for the role. the most important character in Villeneuve’s future film, the new adaptation for the big screen of the universe created by Frank Herbert, ” Dune ”. He also shows them that he is a very good actor, a complex actor.
He has shown this in many productions in which he played, but here he had a role that required a lot of seriousness and maturity. He also shows here that he is a very talented young man, constantly in very good performances and confirms again that he will be a great actor. Rarely are the actors who manage to be so good from the beginning of the acting path.
Pattinson is also entertaining in a role that arouses the smiles of viewers, a role played in the style of a rare actor, one that has grown enormously in recent years, now being one of the best actors of those times.
Also worth mentioning is Joel Edgerton, a good actor who plays well in this production directed by David Michôd.