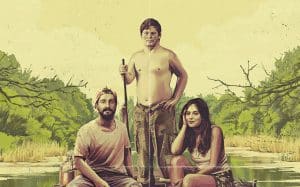 One of the most heartfelt movies I’ve seen so far. Made for no money purpose, made just because some people had an original idea (very rare lately), the film is a simple, sincere, real and very motivational one.

The story of this production revolves around a boy who dreams of becoming a prized wrestler, as is his idol that he follows every day on his favorite tape. It’s the story of a more special guy, Zak, a boy with Down Syndrome, a problem that keeps him locked up in an institution that doesn’t allow him to be independent, follow his idol and listen to his heart. His problem stops him from doing things that other people do easily, but it is a situation that also has positive aspects, being represented by the sincerity, kindness and optimism of the person concerned. There are qualities that the ‘normal’ do not have, we hardly manage to be honest, good and optimistic in any situation. The character is played very well and naturally by Zack, a boy who also faces the same problem in real life. His presence in the film created a special status among those who worked on this production, as Dakota and Shia said.

It is the story of a dreamer stopped, pulled to the right by the situation with which he is forced to travel through life. A special person who receives the freedom and independence she needed and decides to take her on her way to fulfilling her long-held dream. Helped by a lost man in the present in which he feels thrown, the two team up and go on the beautiful and free adventure they both needed.

Shia LaBeouf reminds us that there is something special about him, that he is a very good actor forgotten by the filmmakers, most of the disappearance from the attention of the directors being created by all the decisions he has made in recent years. I am very happy that he is back in strength lately, he has always been an actor that I appreciated, that I have watched with pleasure. I hope he manages to take on equally interesting, simple, roles that help him show off his acting talent. He is also praised by critics for his performance here, but also for his role in “Honey Boy”, a film he also wrote.
Dakota Johnson manages to play a good role again, coming here with her simple and natural style, where she easily manages to convey the kindness that her role demands. He makes perfect team with Zack and Shia in this film that deserves to be seen and appreciated by more people.
Tyler Nilson and Michael Schwartz are the ones who worked very well on the directing and the story, they were also the ones who trusted Zack Gottsagen to fulfill his dream, to be an actor. The film is a parallel between his real life and that of the character he played in the film, between his dreams that differ, but which have the same motivation behind, the same optimism.

An original film, sincere, simple, special and full of soul that deserves to be seen by everyone. One of the most beautiful films of the year, a pleasant surprise. An achievement wrapped with positive and motivational messages.