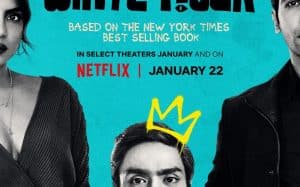 Employed by a wealthy family, an ambitious Indian driver uses his intelligence and cunning to escape poverty and become an entrepreneur. Film based on a successful novel.

We know, the title of this chronicle is controversial (even naughty!), But this is exactly the case with the film recently released on Netflix and left for a week in the local top 10. Its reception was even better abroad, as The White Tiger, the screenplay for the exciting novel of the same name written by Aravind Adiga, even reached number one on Netflix. Here’s what we liked about this movie and why you might want to see it too.

In short, The White Tiger shows us the exceptional trajectory of Balram Halwai (Adarsh ​​Gourav) as a teenager from a lower caste on whose shoulders lies the hunger of the 80’s (we exaggerate, but there) relatives for the extraordinary chance to become the driver of a promising businessman and much more. We do not miss a spoiler if we reveal from the beginning that the story is told in the first person by Balram, years later, when he became a successful entrepreneur: this is exactly how the film begins. But how does Balram manage to get rich? And what about the poster glimpsed in the first scenes, in which we find out that the hero is wanted for murder?

Directed by Ramin Bahrani, an American-Iranian director who released most of his previous feature films in the selection of the Venice Film Festival, The White Tiger explores the great themes of the novel and invites the audience to put themselves in Balram’s shoes and decide for themselves , whether or not the steps he takes are unforgivable. Or justifiable? It’s just that, if you read this chronicle on a laptop bought from emag, next to the hot radiator and with the internet paid up to date, there are great chances that you won’t have the right to judge Balram …

True, The White Tiger’s momentum is somehow marred by the success of Sacred Games, the first Netflix series made in India and with a similar hero in the spotlight (our chronicle here). It’s just that last week’s premiere has a much brighter approach to entrepreneur Balram, seeming to suggest that his trajectory is justified. Yes, we can give verdicts in Balram’s case, because judging others is the global sport of the new millennium, but it would be a sterile verdict, focused on the letter of the law and not on values ​​closer to us. In The White Tiger, we have not only a fierce class struggle, but also a denial of the famous “live and let live”: “kill so that you are not killed” …

There is endless discussion about the chances of the Tiger Oscars, although we believe that the Academy can find better alternatives in almost all categories. Beyond his story of an unlikely survival, Bahrani’s film is hampered by the hero’s long voice over and a more than bizarre final scene. It is, however, more than visible, especially in our Romania, where corruption and poverty are still serious diseases and difficult to cure …