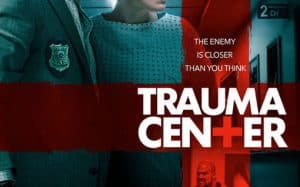 Trauma Center follows the story of a revenge-hungry detective who is determined to solve the mystery surrounding the brutal murder of his partner and an informant. In this endeavor, Wakes joins forces with Madison, a witness injured during the shootings. Alone and trapped overnight in a hospital, the injured woman must escape a pair of dangerous killers who are on the trail of the only evidence that can involve them in a heinous crime: the bullet in her leg. After the killers pursue Madison on an abandoned hospital floor, she comes to confirm Wakes’ biggest fears: the two men are in fact two corrupt cops covering up a murder. Fortunately, Wakes is assigned to protect her, and as the night becomes more dangerous, he looks forward to revenge.