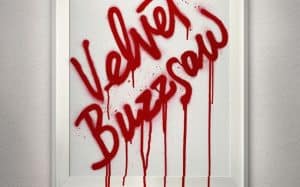 Velvet Buzzsaw is a satirical thriller with action set in the world of contemporary art in Los Angeles, where artists who make good money and top collectors pay an exorbitant price when art becomes a commodity.

Mbuuun … Velvet Buzzsaw, this “Final Destination” with art and an accent of superiority, will not go unnoticed due to the impressive cast it has. But otherwise, I couldn’t find any other arguments.

pluses:
– another critical eye on critics
– a new lesson of “demand and supply” and how demand is what dictates the quality of a thing, not the other way around
‘Amorphous Jake Gyllenhaal as Morph, which he needed to
– there are times when you can get lost in certain frames that are really nice
– He couldn’t make me want Starbucks, even if it was everywhere

minuses:
– totally predictable, there is no twist or twist attempt somewhere
– you can get the impression that you see two totally different movies in the two hours of Velvet Buzzsaw
– Gilroy remains on my list of “meh” directors

In 2014, Jake Gyllenhaal played a pretty good role in the film Nightcrawler (2014), directed by the same Dan Gilroy and with the same Rene Russo, also that film almost brought an Oscar to the director. In 2019 Dan Gilroy again at the helm of a film starring the same Jake Gyllenhaal and Rene Russo, this time .. a failure, nothing more, apart from Gyllenhaal’s performance, the film is dusty, probably if it wasn’t even no one looked at them. The idea behind the script is okay, only it is executed by an inexperienced and mediocre director.