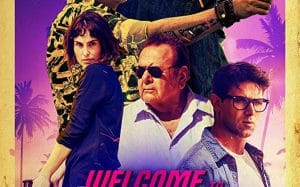 Video game designer Matt Booth has only one chance to save his career: to unveil his most important project at the Video Game Awards in New Mexico. After several adventures, Matt sets off for his destination, but he could never imagine the dangerous world he is about to enter. As soon as he lands, an army of people is on his trail: the CIA, paid assassins and federal agents, all looking for a mysterious package that Matt knows nothing about, but for which he is suspected of smuggling. Hunted from all sides, Matt is helped by Agent Adriana Vasquez, a fatal woman who is guided by her own rules. Forming a team with the beautiful woman and channeling all her video game skills, the two reveal a conspiracy that could shake the foundation of the United States, and maybe even the whole world.